Photos In The Attic

In Photos in the Attic we consider the attic’s role of nostalgia in the passage of time. The show begins with a collaborative textile work that examines youth and personal identities. The works are provisional in their completeness; allowing the viewer to insert their own thoughts into the space. By working with a vast array of mediums such as paint, textiles, sculpture, and printmaking; we play with the idea of the attic as a central hub for all memories and past versions of ourselves. A museum of personal artifacts. We explore impermanence and the idea of aging. The shapes that this can take and how objects are impacted. Ways in which identities are shaped by memories of the past; looking at how time can impact everything around us. We focus on the effects of time in identity and memory, and the viewer is taken on a journey of forced reflection. 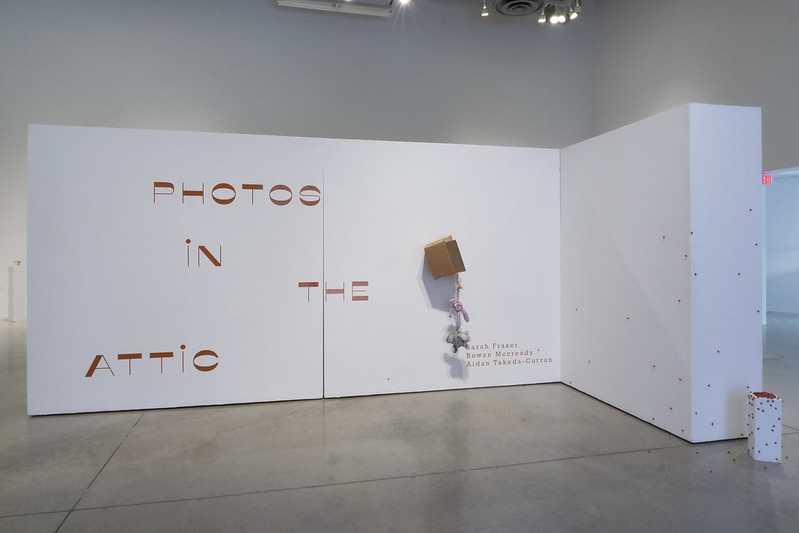 Our exhibition Eden conveys messages about identity, self-discovery, acceptance and reflection. The story of Eden is well known, which allows viewers to resonate with our works and correlate Eve as the fundamental character and identity of women. Since biblical times, women have been associated with inadequacy; Eve’s sin portrays a presumed weakness inherited by women. Eden alludes to themes of human progression, sexuality, and temptations as we explore the challenges women face growing up in a world where our bodies are constantly sexualized and critiqued. Our exhibition reflects themes of femininity as we begin to understand our identities as women and experience growth in our separate gardens of Eden. 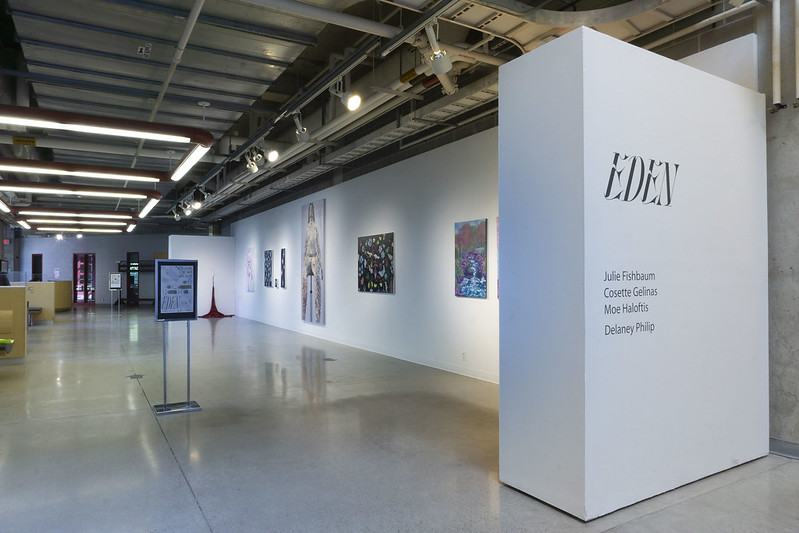 Online viewing of "The Apocalypse In Your Bedroom" The Movie

This film adaptation of the award-winning, self-mythologized facade of a rock show incorporates life-sized video projection, original music, gestural choreography and on-the-go stage props to coalesce into a black-box style theatrical spectacle meets dirty diary, exploring the elusive and dichotomous nature of queer identity. With a reliance on the grimy mustard-coloured lights and sequins of 70s glam rock aesthetics, the protagonist travels the mental collapse of a dark night of the soul, searching for purpose in a world that doesn’t care to be purposeful. Themes include rejection, broken promises, wishes on a star, deals with the devil and packing up to leave with no intention of return… leaving behind the ghost of glitter’s past.

LOMAA’s Queer Frontiers critically reflects on Canada’s 50th anniversary celebration of the purported “decriminalization” of homosexuality in the country. Serving as a counter to the state revelries, LOMAA will host 8 artists, artist duos, or curators who have established practices post-legislation and remain on the frontiers of Canadian queer media. This project centres queer narratives and praxis as a means to interrogate historical representation and continue fortifying queer futures within this country.

Located in John Labatt Visual Arts Centre at Western University, the Artlab Gallery is a vital part of the Department of Visual Arts. The Gallery is focused on projects that involve and respond to social and cultural issues, primarily supporting the research and practice of students and faculty. Each year approximately 14 projects and events are presented, exploring conceptual and experimental production that includes a wide range of mediums.
https://www.uwo.ca/visarts/artlab/

London Ontario Media Arts Association (LOMAA) is a regional, emerging non-profit, artist-run organization focused on the exhibition of alternative and experimental time-based and media art. With an emphasis on progressive contemporary Canadian practices, LOMAA supports the presentation of local, national, and international artists in the areas of moving images, performance, new media, and sound art.
https://www.lomaa.ca

Walter Benjamin’s 1929 essay Surrealism: The Last Snapshot of the European Intelligentsia suggests that a central feature of Surrealist work was the perceptual experience he named ‘profane illumination.’ Benjamin describes the process by which, sometimes but not always drug induced, a person might be distracted into perceiving the most ordinary, overlooked objects of everyday reality as uncanny, supernatural, and irrational. According to Benjamin, Surrealism’s ability to disorient and estrange through this ‘profane illumination’ made it a potentially revolutionary operation. A few years later in his Artwork essay Benjamin identifies an analogous trait in the the work of Dadaist painters and poets, writing that “their poems are 'word salad’ containing obscenities and every imaginable waste product of language. The same is true of their paintings, on which they mounted buttons and tickets. What they intended and achieved was a relentless destruction of the aura of their creations, which they branded as reproductions with the very means of production.” While the latter essay suggests that it is the reproducibility of buttons and tickets that destroys this aura I prefer to think that Benjamin was simply too sober in his appraisal of these works, leaving himself perceptually untuned to the profane character immanent to their everyday objectness.

The separation of the sacred from the profane is one art’s most strictly maintained divisions, extending even to the architectural standard now ubiquitous in nearly all contemporary art galleries. This is described in detail in Olav Velthius’ Talking Prices, a comparative analysis of the business practices and pricing logic of art dealers in Amsterdam and New York in the early 2000’s.

In some cases, the back is sealed off hermetically, suggesting that the exhibition space is all there is to the gallery. Other gallery owners allow the public at least a partial view of the back space through open doors or glass windows. In small galleries … the back space may be limited to a single room or even a niche of the gallery space, where a small number of artworks are stored and a desk space is located for the owner and her assistant. In the largest New York Galleries … the back of the gallery consists of several corridors and spaces with unique functions. These spaces may include the following: offices for the directors or dealers and, in some cases, their personal assistants; a private viewing room, furnished with comfortable seats, where potential buyers can look in full comfort at a small number of works they are interested in; a stock room, where (part of) the inventory of the gallery is stored — the everyday territory of the art handler, who is responsible for the shipping and installation of artworks. A general office room may have a large table where staff meetings take place, and where deals may be negotiated and arranged between the dealer and a collector, away from the works of art.

Velthius describes this as a Durkhemian separation that functions to remove any trace of commerce (ie. the profane) from the sacred space of the exhibition. The need for this is made clear by the Italian philosopher Giorgio Agamben in his essay In Praise of Profanation, in which he recalls the legal definition of the profane in Ancient Rome.

The Roman jurists knew perfectly well what it meant to "profane." Sacred or religious were the things that in some way belonged to the gods. As such, they were removed from the free use and commerce of men; they could be neither sold nor held in lien, neither given for usufruct nor burdened by servitude. Any act that violated or transgressed this special unavailability, which reserved these things exclusively for the celestial gods (in which case they were properly called "sacred") or for the gods of the underworld (in which case they were simply called "religious"), was sacrilegious. And if "to consecrate" (sacrare) was the term that indicated the removal of things from the sphere of human law, "to profane" meant, conversely, to return them to the free use of men.

And it can be an uncanny and irrational experience to enter that profane space which lies just beyond the walls of the gallery. My own research is particularly interested in the ways that contemporary art objects are traded, the logistics of the art business, the storage and shipping of artworks, their care and circulation. This often finds me considering artworks in those moments that they are removed from their intended site of operation; out of the white-cube exhibition space and in the storage racks of the gallery’s back room. This is also the space that inverts Benjamin’s misunderstanding of Surrealism as it sees artworks transformed into art objects, which is a true profanation.[1] And it is only as objects that these works may then be handled by gloved technicians, wrapped in cushioning, and readied for transport.

That which has been ritually separated can be returned from the rite to the profane sphere. Thus one of the simplest forms of profanation occurs through contact (contagione) during the same sacrifice that effects and regulates the passage of the victim from the human to the divine sphere. One part of the victim (the entrails, or ex ta: the liver, heart, gallbladder, lungs) is reserved for the gods, while the rest can be consumed by men. The participants in the rite need only touch these organs for them to become profane and edible. There is a profane contagion, a touch that disenchants and returns to use what the sacred had separated and petrified.

Perhaps what is potentially radical about the buttons and tickets Benjamin wrote about in Dadaist works, and in the Readymade more generally, is that they not only point their own mechanical (re)production, but also possess a haptic indexicality that conjures their handling as objects prior to their consecration as artworks.

Untitled (moving objects) (2021) is an installation of provisional sculptures created from 12 moving blankets and a number of objects found in the gallery that have previously had direct contact with artworks. The blankets, wrap and gloves acknowledge the materially fragile nature of the works that have and will enter this exhibition space, their dual existences as both artwork and object, and their always potential profanation.

[1] Everyday objects already exist within profane sphere, so don’t require further intoxication to be perceived as such. 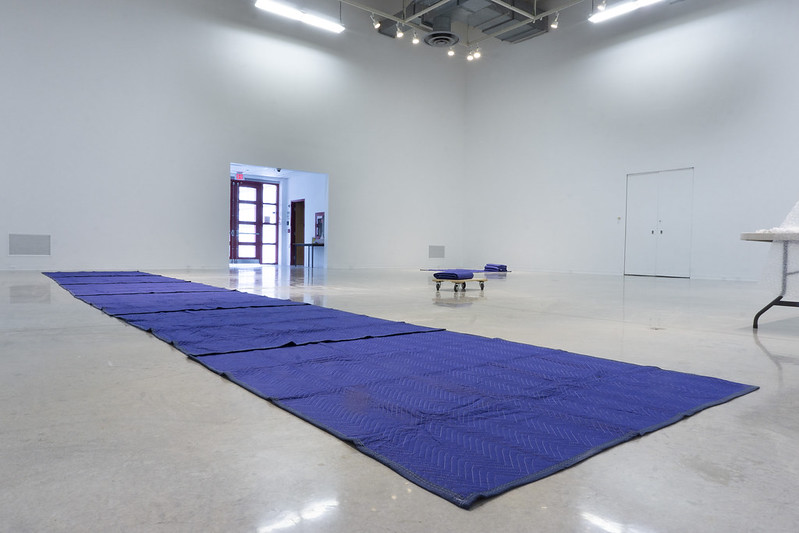 "Hello To Printing" will be on view in the Cohen Commons gallery from October 11 - 21. The exhibition features work done by SA 2630A Introduction to Print Media and SA 3633 Print Media students. A range of techniques are explored in this exhibition, including linocuts, 1-colour etchings and 3-colour silkscreen prints. 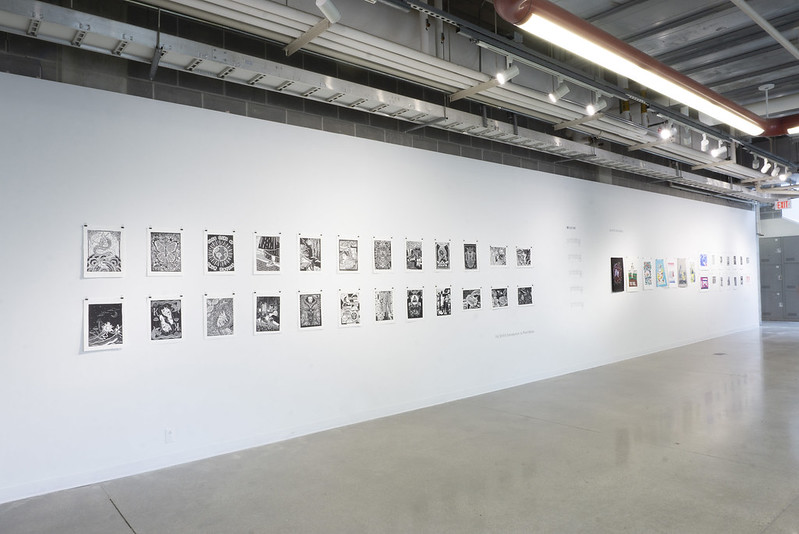 Catch up on our Digital Features.