Joint replacement surgeries are increasingly in demand. In 2004-2005, there were over 58,000 hospitalizations for knee and hip replacements in Canada; today, over 137,000 of these operations are performed annually, with an associated expenditure of $1.4 billion for inpatient hospital and physician costs.

The majority of patients who undergo replacement surgery suffer from arthritis, a chronic health condition that affects 6 million Canadians. Although we often assume otherwise, experiencing severe joint pain is not limited to the elderly. High impact and repetitive activity like basketball, tennis, and skiing add a significant level of stress to joints and increase susceptibility to painful injuries. As a result, pro, amateur, and Sunday-afternoon athletes alike may require a joint replacement at some point in their life.

A couple of decades ago, replacement surgeries were rarely performed on patients under the age of 70, since most implants had to be replaced, at most, every ten years. Young people who wanted to maintain an active, post-surgery lifestyle would likely have endured numerous revision surgeries. These operations cost nearly 80% more than the initial surgery and require progressively longer in-hospital recovery times.

Developing longer-lasting prosthetics to help patients of any age return to a regular, pain-free, and productive life, materials scientists and engineers found a means of producing implants made of titanium that can last upwards of 20 years. This unique metal is now the most popular implant material in Canada – it is not harmful or toxic to living tissue and can withstand corrosion from harsh bodily substances like blood.

Western University’s Electrochemistry and Corrosion Science Group and Nanophysics Laboratory, and in particular graduate student Hunter Feltham, investigates the thin film oxide growth mechanism of titanium. This oxide layer, which grows naturally on titanium in the presence of oxygen, protects the underlying metal from substances that may accelerate corrosion. “If we understand how this oxide film grows in the human body, we can manufacture titanium implants that will withstand material decay for longer durations,” explained Feltham.

Consider that our blood is similar to saltwater, a substance which is known to accelerate material degradation. The titanium oxide layer prevents the metal from deteriorating in this corrosion-intensive environment; however, the film will continue to grow very slowly in the human body. If chloride ions in the blood were incorporated into the titanium oxide as the film expands, it could form titanium chloride impurities, which would change the properties and quality of the protective layer.

"If we understand how this oxide film grows in the human body, we can manufacture titanium implants that will withstand material decay for longer durations." - Hunter Feltham

Feltham’s challenge is to determine the growth mechanism that is generating the new oxide film, as well as the location in which the film is being formed, since both of these factors help scientists determine the long-term effects of having titanium oxide in the body. Feltham developed experiments in which he embedded gold atoms inside of titanium samples using a tandetron, a powerful particle accelerator housed at the university. These gold atoms act as a ‘marker layer,’ giving him a reference point to determine how much the oxide layer has grown. 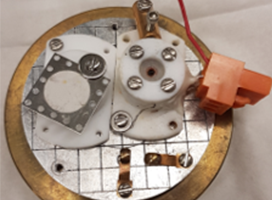 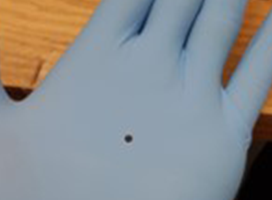 The electrochemical cell scaled down to an extremely small size; this cell is inserted into the tandetron to analyze Hunter's titanium samples. 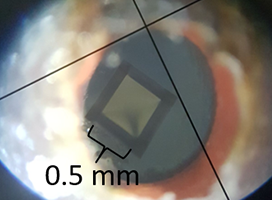 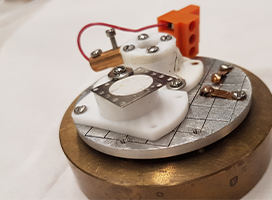 Ultimately, scientists and engineers could use Feltham’s findings to create enhanced protective coatings that will prevent material degradation for longer periods of time, thus significantly reducing repair costs or threats to safety where titanium implants are used.