It was the Carl Sagan book, Contact, that launched Catherine Neish’s interest in planetary science. As a fourth-year undergraduate, she joined the Arecibo telescope in Costa Rica for an internship – coincidentally that same telescope featured in the early scenes of the 1997 blockbuster rendition of the book, featuring Jodie Foster and Matthew McConaughey.

“Reading Contact, then seeing the movie inspired me to apply for a summer internship at Arecibo. That work is what got me interested in planetary radar research and put me on the path to where I am today. Working at Arecibo was a really special experience,” says Neish, of the Department of Earth Sciences. In December 2020, that telescope collapsed after nearly sixty years in service. “Our community is certainly grieving this loss. The telescope was a huge part of the regional economy and was instrumental in developing Puerto Rican science.”

After being introduced to the University of Arizona graduate program through her Arecibo internship, Neish started her PhD there. At the same time, the Cassini space probe began its orbit around Saturn. “We started getting the first ever images back of Saturn’s largest moon, Titan. Nobody knew anything about it back then!” Being at the right place at the right time meant that Neish was amongst that first cohort of researchers that was learning about the organic molecules found in Titan’s atmosphere. This first brush with astrobiology morphed into a career interest looking for evidence of life on Saturn’s moon; Neish is now the astrobiology team lead on NASA’s 2027 Dragonfly mission (currently scheduled for launch in 2027). “Those early connections I made in graduate school are what got me to this exciting position I have now,” she says.

The Dragonfly mission and studying astrobiology on Titan is what Neish calls her “passion project”; after her PhD, she branched out to using radar data to study the surface of Earth’s moon as well. “That move was brought about mainly by the practicality of where the research funding was,” she explains."But I have really grown to love our celestial neighbour." Neish and her colleagues spent years mapping the moon using radar imagery to augment the optical information collected by telescopes. “Different instruments are sensitive to different properties on the surface. Radar lets us probe beneath the dust and rocks covering the moon.” Neish and her group are interested on impact melt flows – the rocks that are liquefied by the white heat of meteorite strikes. “The question that has been plaguing me for the last decade is why the craters are so rough in appearance,” says Neish. Her research group uses a combination of radar data from the moon and analogous structures on Earth, like the relatively fresh lava fields in Iceland and Idaho.

Dr. Catherine Neish in the Field 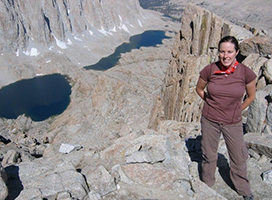 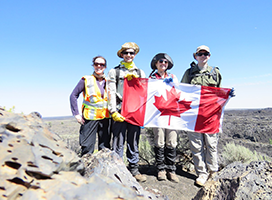 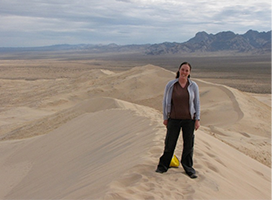 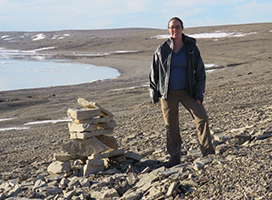 In her spare time, Neish is a leader for her daughter’s Girl Guide troop. “I love using science to help unravel the mysteries presented to us by nature!” she says, “Being a part of the Girl Guide community is great way to inspire our youth to become interested in science and engineering.”