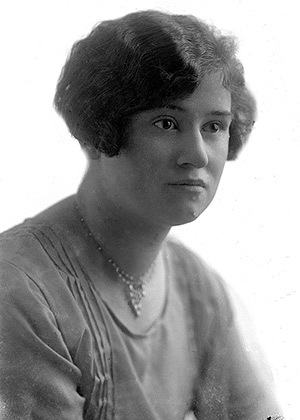 Two plaques, voted on by the Western community, will be cast annually: one from a STEM discipline and one from a social sciences, arts and humanities-based discipline. Each will be affixed to a relevant building on campus and provide a link to additional media online.

A pioneering Canadian zoologist, Dr. Helen Battle was emeritus professor of Zoology – the study of animals – at Western University.

Her career shone with firsts.

After earning her BA at Western in 1923, she became its first Master of Arts graduate from the Department of Zoology. Her thesis was in the field of fish embryology, an area that fascinated her and in which she went on to make some of her greatest scientific contributions.

She was the first woman in Canada to earn a PhD in marine biology, from the University of Toronto. With this, she returned to her hometown of London, Ontario in 1929 and began teaching at Western.

As an Assistant Professor at Western, Battle was one of the first zoologists to actively apply laboratory research methods to marine problems. She also pioneered the use of fish eggs to study the effects of cancer-causing substances on cell development.

Battle earned a full professorship in 1949. Her insight, hard work and vision contributed to many subsequent leadership roles. She became the Acting Head of the Zoology Department in 1956, and was instrumental in creating the design of Western’s Biology & Geology Building.

One of the first women to enter a field dominated by men, Battle had a particular interest in the advancement of female students and encouraged them to go to graduate school.

Battle’s first love was teaching, at which she excelled over 50 years. In that time, she taught an estimated 4,500 students, many of whom became leaders in Canadian biology and carried her influence worldwide. Her drive, enthusiasm and sincere interest in people generated affection and respect from both students and colleagues. This was recognized in 1967, when the Department of Zoology established a scholarship in her name.

Even after her retirement in 1967, Battle found innovative ways to teach. From 1968 to 1970, she was one of the first instructors to use television, taping a pioneering series of lectures.

Battle maintained an active research program while teaching. She spent many summers between 1923 and 1941 in New Brunswick at the Fisheries Research Board of Canada, synonymous with excellence in this area of research. She also conducted studies at the Ohio State Fisheries Lab, the Atlantic Biological Station in New Brunswick, and the Marine Biological Lab in England. She shared her findings in 37 published articles between 1926 and 1973.

Battle co-founded and was first vice-president of the Canadian Society of Zoologists in 1961. She was the organization’s president from 1962 to 1963, the first woman to be awarded the F.E.J. Fry medal for contributions to Canadian science, and was named an honorary lifetime member.

Battle passed away in London on June 17, 1994, but her spirit lives on in the young women she encouraged to study science, the students who have become leaders in Canadian biology, and student awards, a scholarship and a memorial lecture at Western.